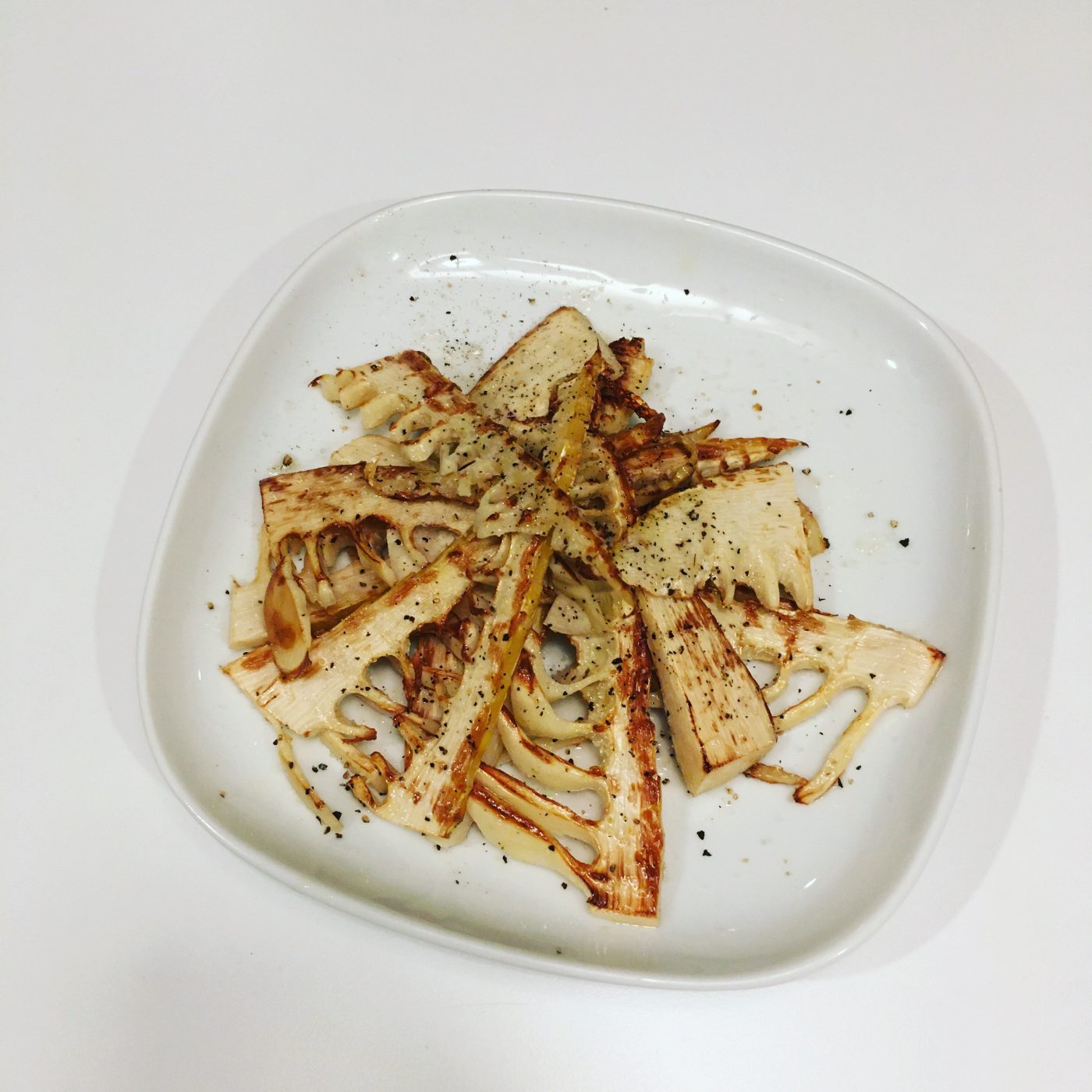 The season for bamboo shoots in Chiba has started just a few weeks ago… juggling between bad weather, and cold days, we went once to search for some with our neighbors but were not lucky enough to find any. Too early for that side of the area. Probably a few wild boar were also quick enough to come before us and dig to pick their own. But it doesn’t matter, we have friends who have friends who have bamboo shoots. And so I ended up with 2 beautiful shoots. I didn’t have time to prepare them in The country, so I took them with us to Tokyo. What a mess to prepare them in my pocket kitchen! But what a reward to eat them!!! I never regret!

This year, after a classic bamboo shoots rice, back then when my parents were visiting, I decided to go with a few different and more creative recipes. I prepared two different recipes. One is a simple sautéed version. So delicious I had to do a second batch! The second is a recipe of steamed buns. Last year I made eagle fern and bamboos shoot ones, but as I am getting better at making buns, I felt it is worth sharing this one!

Both recipes assume that you have a parboiled bamboo shoot. For picking and parboiling look at my earlier post here.

Cut the bamboo shoot in 4 vertically. Slice each quarter. In a fry pan heat the oil. The add the shoots sliced. Cook until golden, flip on the other side, cook until golden. Sprinkle salt and ground pepper and serve immediately.

First prepare the dough by mixing the flour, baking soda, salt and add water little by little until obtaining a smooth dough. Put under a wet cloth and let it rest at least 30min. More is better.

Cook the pork filet if not yet cooked. Simply, in a pan with pepper. Then chop finely.

Chop the bamboo shoot in coarse manner. You want chunks to remain as it will bring the contrast between the smooth dough and meat and the crunchy bamboo. However, if too coarse, filling the buns will be hell. So 3-8mm is a good target.

In a bowl mix the chopped bamboo shoot, the pork, add 1tsp of soya sauce and stir well.

Back to the dough now. Cut in 8 pieces. Make balls and roll with a rolling pin into 12-15cm diameter circle. Put a large spoon if filling in and close the dough. I don’t have a very good technique, but it works well when I first fold in two then fold in the orthogonal direction, then I add fold in each quadrant. For this specific recipe instead of cooking them folds up, I flipped them to hold the folds under. Then steam for 15min. Serve with soya sauce and mustard and enjoy!